According to what we are seeing, there is 'a huge unknown energy force' that has decided to pull 'the invisible strings of the elite' and bring down its enormous 'global system' awash with all types of 'fraudulent and vice ridden acts'. Only in this way can we be 'happy', raise our 'vibrational frequency of quantum light lost for centuries' and take 'our rightful place' in the evolutionary process, as takes place on other advanced worlds of 'the Galactic Confederation'.

Therefore, 'a very powerful Earth-cosmos connecting force' is being created and 'eminent figures and professionals' are contributing to this noble mission. They work with magistrates, prosecutors, judges and lawyers to thoroughly shatter the network and this power that has been 'mistakenly managed' for so many years.

They are beings with a level of 'consciousness-wisdom' who, 'together with' these high-profile figures and professionals, have formed an 'alliance-agreement', in which 'the beings of Agarthi, the Mutants' and a group of transplanted 'Sirians and Pleiadeans intelligently and stealthily' operate. Their objective is the definitive 'overthrow and removal' of 'the Nibiruan-Alien elite', who persist in 'securing and perpetuating' their enslaving power at all costs.

Nonetheless, to accomplish this process of 'disbandment and transformation', the incredible yet terribly censored 'free-toroidal energy' plays a fundamental role. It was discovered by the scientist and inventor Nikola Tesla, and taken up again many years later by other men of science, such as Guglielmo Marconi, Edward Leedskalnin, Viktor Grebennikov, John Bedini, John Hutchison, Dr Royal Raymond Rife, Eugene Mallove...

There is also the case of the nuclear engineer Mehran Tavakoli Keshe, who created 'the Keshe Foundation' that has made known an 'anti-gravitational plasma' revolutionary technology, which could make 'journeys to outer space' possible, as well as apply this 'renewable energy' to transport, science, 'medicine, electricity', etc. He was even able to 'produce a flying saucer', similar to those of the beings from 'evolved worlds'.

This verifies that behind everything, there is 'a powerful league-alliance' of certain nations, which together with 'the Interplanetary Confederation and the Great Galactic Confederation of Light' have dedicated themselves to provoke the imminent downfall of all 'aliens disguised as humans' that have occupied our planet for many centuries.

This is even more so now, as 'the photonic energy of the Pleiadean sun Alcyone' increasingly intensifies... Nonetheless, up until the moment 'the hologram' in which we are immersed 'fully opens', 'the resistance and opposition' of the dark ones will not cease. 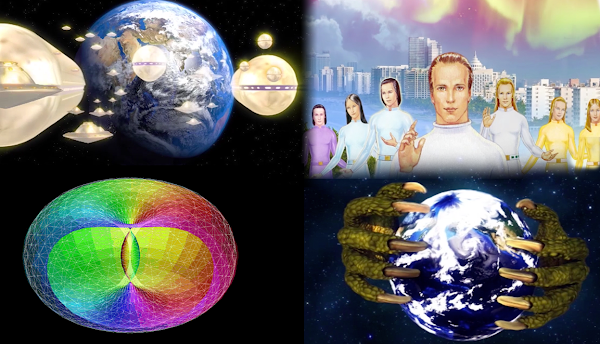