Continuing with the plot to which the shadowy forces of evil want to subject us in their heinous desire to decimate the population, they have created some terrible and clandestine 'concentration-confinement camps' which are similar to or even worse than those built by Nazi Germany during the chilling, devastating and terrifying World War II.

Where did this monstrous idea executed against the US and the whole of humanity come from?

It is incredible to say but the creation of the Federal Emergency Management Agency (FEMA) was not debated at all in US Congress, but was simply created by decree-law...

Who was the real architect of this agency, this new Shadow Government established with the excuse of managing national emergencies in which the [rigid and heavily armed] military abusively seize control of everything?

What is the secret objective of the more than 800 camps for confinement and captivity perfectly distributed across the 50 states of the American Union and also in other countries such as [Canada, Puerto Rico, Mexico, Cuba and several European countries and besides this, surprisingly many of them are built very near to dangerous nuclear power plants.

Judge for yourself from the evidence shown! 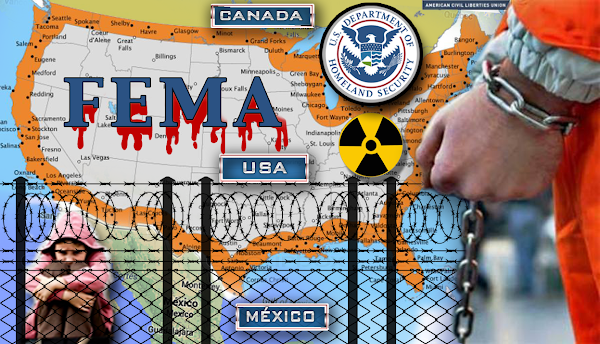